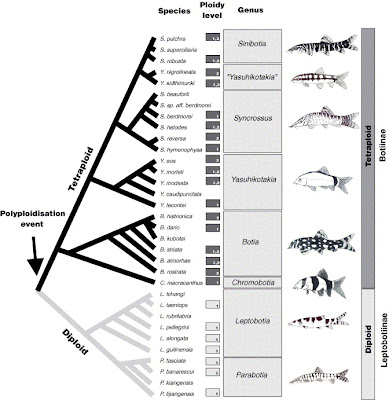 [superlink: Molecular Phylogenetics and Evolution]
文獻來源: Šlechtová V, Bohlen J, Freyhof J, Ráb P. 2005. Molecular phylogeny of the Southeast Asian freshwater fish family Botiidae (Teleostei: Cobitoidea) and the origin of polyploidy in their evolution, Mol. Phylogenet. Evol. 39 (2005), pp. 529–541.
Abstract
The freshwater fish family Botiidae is represented by seven genera on the Indian subcontinent and in East and Southeast Asia and includes diploid as well as evolutionary tetraploid species. We present a phylogeny of Botiidae including 33 species representing all described genera using the mitochondrial cytochrome b and 12s rRNA genes to reconstruct the phylogenetic relationships among the genera and to estimate the number of polyploidisation events during their evolution. Our results show two major lineages, the subfamilies Leptobotiinae with the genera Leptobotia and Parabotia and Botiinae with the genera Botia, Chromobotia, Sinibotia, Syncrossus, and Yasuhikotakia. Our results suggest that two species that were traditionally placed into the genus Yasuhikotakia form a monophyletic lineage with the species of Sinibotia. A review of the data on the ploidy level of the included species shows all diploid species to belong to Leptobotiinae and all tetraploid species to Botiinae. A single polyploidisation event can therefore be hypothesised to have occurred in the ancestral lineage leading to the Botiinae.