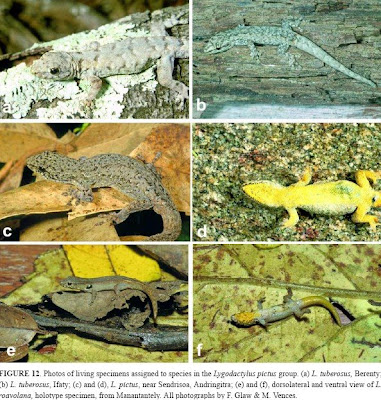 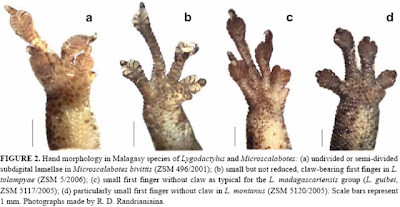 文獻來源: Puente M, Glaw F, Vieites DR, Vences M. 2009. Review of the systematics, morphology and distribution of Malagasy dwarf geckos, genera Lygodactylus and Microscalabotes (Squamata: Gekkonidae). Zootaxa 2103: 1-76. [摘要連結]
Abstract The Malagasy species of the dwarf gecko genera Lygodactylus Gray and Microscalabotes Boulenger have been largely neglected in recent studies on the herpetofauna of Madagascar. Since the historically earliest taxonomic description of Lygodactylus tolampyae in 1872, studies have mainly dealt with the systematics of these lizards, yet many taxonomic issues and the validity of several species is unclear. Some species have been described on the basis of immature specimens, or based on a low specimen number from single sites, and there are no assessments of geographic variation. In this paper we provide a review of Malagasy Lygodactylus and Microscalabotes based on preserved material from a number of major natural history museums, including types of most species, and on own collections. For each species we provide morphological diagnoses, standardized descriptions of up to 24 morphological characters, a list of localities, and discussions of geographical variation if it was apparent from the specimens examined. All except three Malagasy Lygodactylus species are assigned to a total of four phenetic species groups of which at least some may also represent monophyletic units. Hemipenial morphology is described for 11 species and provides a valuable source of characters to distinguish species groups, especially the L. madagascariensis group that differs from other Malagasy species by their lack of hemipenial serrated ridges with pointed papillae, short pedicel and poorly defined lobes. Lygodactylus praecox Pasteur, 1995 is considered as a junior synonym of Lygodactylus klemmeri Pasteur, 1964. One new species, Lygodactylus roavolana, is described based on a unique combination of morphological characters.
張貼者： 版主 於 上午10:56