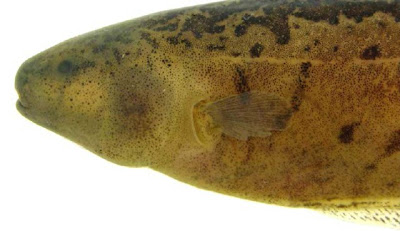 文獻來源: Giora J, Malabarba LR. 2009. Brachyhypopomus gauderio, new species, a new example of underestimated species diversity of electric fishes in the southern South America (Gymnotiformes: Hypopomidae). Zootaxa 2093: 60-68. [摘要連結]
Abstract
Brachyhypopomus gauderio n. sp. is described here from the central, southern and coastal regions of the Rio Grande do Sul state, Brazil, from Uruguay, and from Paraguay. It is diagnosed from the congeners on the basis of body coloration, meristic and morphometric characters, such as the number of anal-fin rays, the position of anal-fin origin in relation to pectoral-fin, the morphology of the distal portion of caudal filament of mature males, and body proportions. The new species has been formerly identified as B. pinnicaudatus and is herein distinguished from it.
張貼者： 版主 於 上午10:03