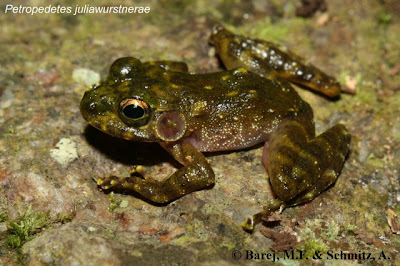 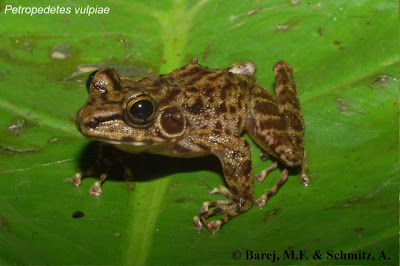 Abstract
We review and summarize the present knowledge on Central African Petropedetes, discuss their taxonomy and describe three new species. We synonymise one name: P. newtonii is a junior synonym of P. johnstoni. Frogs from the African mainland, namely Cameroon and eastern Nigeria, assigned to “P. newtonii” in more recent literature, were misidentified. They are herein described anew as Petropedetes vulpiae sp. nov. Two further new taxa are morphologically similar to other described species. Petropedetes euskircheni sp. nov. is morphologically close to P. parkeri but differs foremost in the smaller size of the femoral glands in adult males. P. juliawurstnerae sp. nov. is morphologically similar to P. perreti and P. cameronensis. It can be distinguished from P. perreti by its less developed webbing and from P. cameronensis by the size of its tympanum and the occurrence of a tympanic papilla in males. A key to adult males of the currently known Central African Petropedetes species is given and an outlook on potential further new taxa is provided.
張貼者： 版主 於 上午9:06