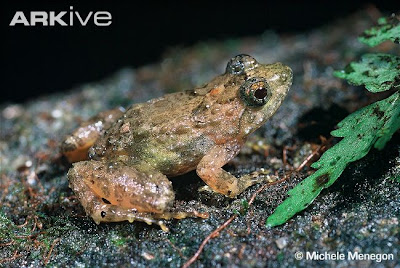 文獻來源: Zimkus BM. 2009. Biogeographical analysis of Cameroonian puddle frogs and description of a new species of Phrynobatrachus (Anura: Phrynobatrachidae) endemic to Mount Oku, Cameroon. Zoological Journal of the Linnean Society 157(4): 795-813.
Abstract
Patterns of species divergence amongst 13 species of Phrynobatrachus from Cameroon were analysed using phylogenetic analyses of mitochondrial DNA sequence data from 12S rRNA, valine-tRNA, and 16S rRNA. A clade endemic to the mountains of western Cameroon and eastern Nigeria, part of the geologic rift zone termed the Cameroon Volcanic Line, supports the view that montane regions have acted as centres of speciation. Bioko Island (Equatorial Guinea), located 32 km off the coast of Cameroon, is populated by three different lowland Phrynobatrachus species from the mainland. Two of these species, Phrynobatrachus auritus and Phrynobatrachus cornutus reach submontane elevations on Bioko Island (up to 1200–1300 m) but are present only at lowland elevations on mainland Cameroon. A new miniature species of puddle frog of the genus Phrynobatrachus restricted to Mt Oku in the Republic of Cameroon is diagnosed on the basis of morphological characters and molecular data. Unlike all other miniature Phrynobatrachus (snout–vent length < 20 mm), males of this species have unique ventral coloration characterized by a black throat, dark brown to black pectoral and abdominal regions, and a light or white area on the proximal hind limbs. Minute spines cover the venter in males, often appearing as white asperities. The description of this new species supports the significance of this montane ecoregion as a biodiversity hotspot for anurans.