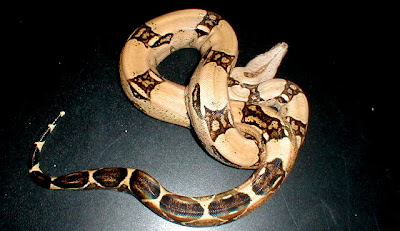 文獻來源: Hynková I, Starostová Z, Frynta D. 2009. Mitochondrial DNA Variation Reveals Recent Evolutionary History of Main Boa constrictor Clades. Zoological Science 26(9): 623-631.
Abstract We sequenced a 1114-bp fragment of cytochrome b gene in six subspecies (115 samples) of Boa constrictor and detected 67 haplotypes. Our analyses revealed the presence of two distinct clades, one from Central America (CA) including the neighboring part of South America west of the Andes, and the other covering the rest of South America (SA). Sequence divergence between CA and SA clades is about 5–7%, which roughly corresponds to a separation at the time of uplift of the Colombian Andes following formation of the Panama Isthmus before 3.5 Myr Sequence divergence within the SA and CA clades is only 2–3%, suggesting a fairly recent spread of these clades Into their current geographic ranges. Thus, we may not be dealing with taxa with a markedly old evolutionary history. Because juveniles of B. constrictor feed mostly on small rodents, we hypothesized that spread of this species was allowed by a new food source represented by murold rodents that appeared after closure of the Panama portal. With respect to the taxonomy, B. c. imperator may be elevated to full species rank. Within the SA clade, a haplotype of Argentinian B. c. occidentalis is markedly distinct, while the remaining haplotype groups analyzed are distributed throughout large ranges and may all belong to a single nominotypic subspecies.
張貼者： 版主 於 下午12:42