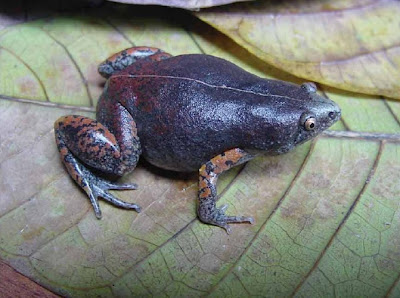 文獻來源: Funk WC, Cannatella DC. 2009. A new, large species of Chiasmocleis Méhelÿ 1904 (Anura: Microhylidae) from the Iquitos region, Amazonian Peru. Zootaxa 2247: 37–50.
Abstract
We describe a new species of Chiasmocleis (Anura: Microhylidae) from lowland rainforests in the western Amazon basin of Peru (near Iquitos, Departamento de Loreto). The species differs from congeners in the Amazon basin by its large size (it is the largest known Chiasmocleis species), bright yellow iris, a grey dorsum with reddish blotches posteriorly and on limbs, and a creamy white venter with bold dark mottling with pale centers. The new species also differs from two other sympatric Chiasmocleis species at 12S–16S mitochondrial DNA (6.1% and 11.9% sequence divergence between the new species and C. ventrimaculata and C. bassleri, respectively). A comparison of the new species with other microhylids found in the western Amazon basin is provided.
張貼者： 版主 於 下午4:25