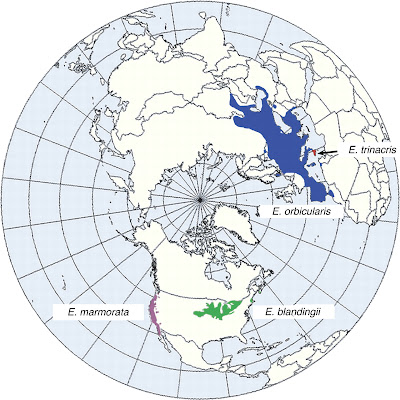 文獻來源: Spinks PQ, Shaffer HB. 2009. Conflicting mitochondrial and nuclear phylogenies for the widely disjunct Emys (Estudines: Emydidae) species complex, and what they tell us about biogeography and hybridization. Systematic Biology 58(1): 1-20.
Abstract
Understanding the mechanisms by which widely disjunct members of a clade came to occupy their current distribution is one of the fundamental challenges of biogeography. Here, we used data from 7 nuclear and 1 mitochondrial gene to examine the phylogenetic and biogeographic history of Emys, a clade of turtles that is broadly disjunct in western and eastern North America and Europe. We found strong disagreement between mitochondrial and nuclear gene trees, with mitochondrial DNA supporting the monophyly of the North American taxa (marmorata + blandingii) to the exclusion of the European orbicularis, and nuclear genes supporting the monophyly of (blandingii + orbicularis) to the exclusion of marmorata. We used fossil-calibrated molecular chronograms, in combination with supporting evidence from the fossil record and paleoclimatology, to identify a potential example of ancient hybridization and mitochondrial gene capture 12 million years ago, which explains this discrepancy. Based on the weight of evidence, we argue that the invasion of Eurasia by Emys orbicularis occurred about 16 Ma via a trans-Beringian land bridge. The case of Emys emphasizes how single-gene trees can be strongly affected by population processes, including hybridization, and that the effects of these processes can persist through long periods of evolutionary history. Given the chaotic state of the current taxonomy of these turtles, our work also emphasizes the care that should be used in implementing taxonomic changes based on 1 or a few gene trees and the importance of taking a conservative approach in renaming or splitting higher taxa based on apparent nonmonophyly.
張貼者： 版主 於 上午12:48