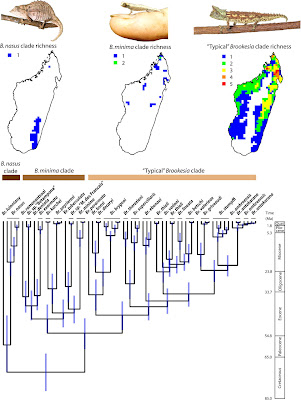 Abstract
Madagascar's flora and fauna are remarkable both for their diversity and supraspecific endemism. Moreover, many taxa contain large numbers of species with limited distributions. Several hypotheses have been proposed to explain this high level of microendemism, including 1) riverine barrier, 2) mountain refuge, and 3) watershed contraction hypotheses, the latter 2 of which center on fragmentation due to climatic shifts associated with Pliocene/Pleistocene glaciations. The Malagasy leaf chameleon genus Brookesia is a speciose group with a high proportion of microendemic taxa, thus making it an excellent candidate to test these vicariance scenarios. We used mitochondrial and nuclear sequence data to construct a Brookesia phylogeny, and temporal concordance with Pliocene/Pleistocene speciation scenarios was tested by estimating divergence dates using a relaxed-clock Bayesian method. We strongly reject a role for Pliocene/Pleistocene climatic fluctuations in species-level diversification of Brookesia. We also used simulations to test the spatial predictions of the watershed contraction model in a phylogenetic context, independent of its temporal component, and found no statistical support for this model. The riverine barrier model is likewise a qualitatively poor fit to our data, but some relationships support a more ancient mountain refuge effect. We assessed support for the 3 hypotheses in a nonphylogenetic context by examining altitude and species richness and found a significant positive correlation between these variables. This is consistent with a mountain refuge effect but does not support the watershed contraction or riverine barrier models. Finally, we find repeated higher level east-west divergence patterns 1) between the 2 sister clades comprising the Brookesia minima group and 2) within the clade of larger leaf chameleons, which shows a basal divergence between western and eastern/northern siste
張貼者： 版主 於 下午10:45