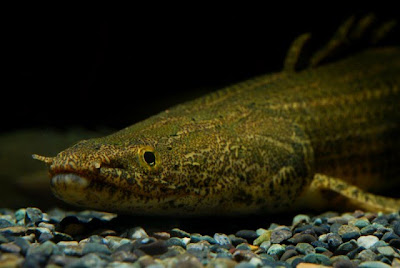 文獻來源: Suzuki D, Brandley MC, Tokita M. 2010. The mitochondrial phylogeny of an ancient lineage of ray-finned fishes (Polypteridae) with implications for the evolution of body elongation, pelvic fin loss, and craniofacial morphology in Osteichthyes. BMC Evolutionary Biology 2010 10: 21 doi:10.1186/1471-2148-10-21
Background
The family Polypteridae, commonly known as "bichirs", is a lineage that diverged early in the evolutionary history of Actinopterygii (ray-finned fish), but has been the subject of far less evolutionary study than other members of that clade. Uncovering patterns of morphological change within Polypteridae provides an important opportunity to evaluate if the mechanisms underlying morphological evolution are shared among actinoptyerygians, and in fact, perhaps the entire osteichthyan (bony fish and tetrapods) tree of life. However, the greatest impediment to elucidating these patterns is the lack of a well-resolved, highly-supported phylogenetic tree of Polypteridae. In fact, the interrelationships of polypterid species have never been subject to molecular phylogenetic analysis. Here, we infer the first molecular phylogeny of bichirs, including all 12 recognized species and multiple subspecies using Bayesian analyses of 16S and cyt-b mtDNA. We use this mitochondrial phylogeny, ancestral state reconstruction, and geometric morphometrics to test whether patterns of morphological evolution, including the evolution of body elongation, pelvic fin reduction, and craniofacial morphology, are shared throughout the osteichthyan tree of life.

Results Our molecular phylogeny reveals 1) a basal divergence between Erpetoichthys and Polypterus, 2) polyphyly of P. endlicheri and P. palmas, and thus 3) the current taxonomy of Polypteridae masks its underlying genetic diversity. Ancestral state reconstructions suggest that pelvic fins were lost independently in Erpetoichthys, and unambiguously estimate multiple independent derivations of body elongation and shortening. Our mitochondrial phylogeny suggested species that have lower jaw protrusion and up-righted orbit are closely related to each other, indicating a single transformation of craniofacial morphology.

Conclusion The mitochondrial phylogeny of polypterid fish provides a strongly-supported phylogenetic framework for future comparative evolutionary, physiological, ecological, and genetic analyses. Indeed, ancestral reconstruction and geometric morphometric analyses revealed that the patterns of morphological evolution in Polypteridae are similar to those seen in other osteichthyans, thus implying the underlying genetic and developmental mechanisms responsible for those patterns were established early in the evolutionary history of Osteichthyes. We propose developmental and genetic mechanisms to be tested under the light of this new phylogenetic framework.
張貼者： 版主 於 下午12:35