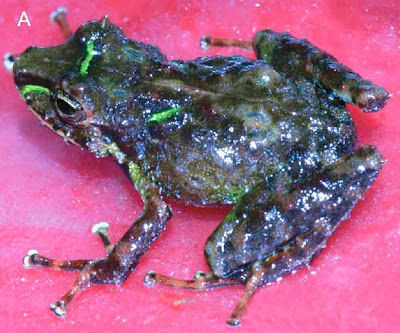 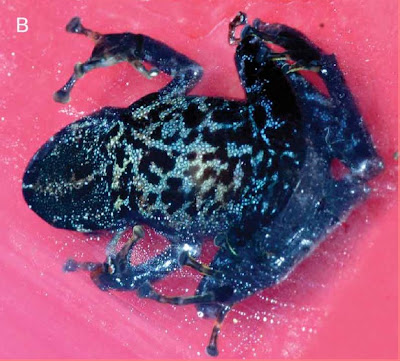 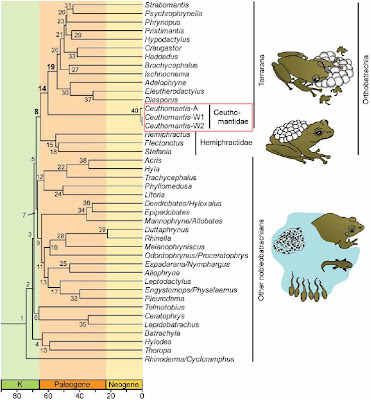 文獻來源: Heinicke MP, Duellaman WE, Trueb L, Means DB, MacCulloch RD, Hedges SB. 2009. A new frog family (Anura: Terrarana) from South America and an expanded direct-developing clade revealed by molecular phylogeny. Zootaxa 2211: 1-35.
Abstract
Three frogs of a new species found in cloud forests on two nearby mountains in Guyana were included in a molecular phylogeny of 17 nuclear and mitochondrial genes (10,739 a ligned sites) that revealed that their closest relative is Terrarana (Brachycephalidae, Craugastoridae, Eleutherodactylidae, and Strabomantidae) and their next-closest relative is Hemiphractidae (marsupial frogs). We place these frogs in a new family, genus, and species which is strongly supported as the basal clade within Terrarana: Ceuthomantidae n. fam., Ceuthomantis smaragdinus n. gen, n. sp. Morphological evidence supports the placement of two other species from the Guiana Highlands, Pristimantis aracamuni (Barrio-Amorós & Molina) and P. cavernibardus (Myers & Donnelly), in the new family and genus. This close phylogenetic relationship of terraranans and marsupial frogs, nearly all of which have direct development, supports an hypothesis that direct development evolved early in the evolution of this huge clade (~1000 species), for which we propose the unranked taxonomic epithet Orthobatrachia.
張貼者： 版主 於 下午10:24